Hurrah!! It's here!! The book we've all been waiting for. The book banned by China, Is now available at your local comic book store TODAY!! As well, Titanium Rain Vol. 1 will be available at major book sellers such as Barnes & Noble, Boarders, and Amazon.com in just another week or so.

So please, go to your local retailer, pick up your own copy today, and tell us what you think. :)

“What I find very telling about the whole situation is at no point
does our book criticize the current Chinese government or any of its
policies," say author/co-artist Josh Finney. "The scenario I wrote is
patterned after the Boxer Rebellion, and is meant to be a statement
against ultra-nationalism and ethnic cleansing. In fact, it is
ultra-nationalists in the Chinese military who attempt to overthrow
the government in TITANIUM RAIN.”

Until now, Archaia Entertainment printed most of its books through 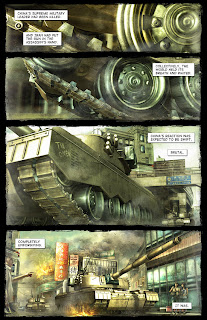 China, an arrangement the publisher has had to reconsider. Clearly
China's cheap manufacturing costs do come at a hidden price.
Censorship.

Controversy over TITANIUM RAIN's publication may have stemmed from a
sequence of pages in the book which show events leading up to a
Chinese civil war. A sneak preview of those pages is available here:
www.glitchwerk.com/press/.

Written and illustrated by the husband-and-wife team of Josh Finney
(Batman, Star Trek: Enterprise) and Kat Rocha (Batman), Titanium Rain
Vol. 1 (full color, 152 pages, 6.625” x 10.25” hardcover with dust
jacket, $19.95, ISBN 1-932386-72-6) collects the first four chapters
of the series. The story is set in the year 2031 and told from the
point of view of US Air Force pilot Alec Killian, who is forced to
shed some of his humanity in exchange for biotech and machine when a
civil war in China spirals into a global conflict.

Despite the numerous production delays TITANIUM RAIN VOL. 1 shipped to
comic stores nationwide this Wednesday, and will be in bookstores the
following week.

More information about author Josh Finney and his reasons for pening
TITANIUM RAIN can be found here:
http://comicrelated.com/news/3086/worlds-within-worlds

About Archaia
Founded in 2002, Archaia has built an unparalleled reputation for
producing meaningful content that perpetually transforms minds. With a
slate including the popular Eisner Award-winning title Mouse Guard, as
well as Awakening, Gunnerkrigg Court, The Killer, Robotika, Killing
Pickman, Artesia and the Publisher’s latest additions of Titanium
Rain, God Machine, Roddenberry Productions’ Days Missing, The Jim
Henson Company library and Mr. Murder Is Dead and Lucid with Zachary
Quinto’s production company, Before the Door Pictures, Archaia has
become synonymous with quality content. For more information on
Archaia or any Archaia titles please visit www.Archaia.com. Archaia
can also be found on Facebook (www.facebook.com/archaiacomics),
MySpace (www.myspace.com/archaiacomics) and Twitter
(www.twitter.com/archaiacomics).

what is the future of this series? I think it is a great read and looks great. but, there isnt alot of buzz about it and really wanted to know if the series is going to continue and when we can expect more out.

Titanium Rain in the News

Promote Your Page Too

The Bond of Saint Marcel